The National Identification Program (NIDP) has signed an agreement with TECH5, a technology vendor in biometrics and digital identity management, to use TECH5’s Automatic Biometric Identification System (ABIS) for the pre-launch phase of Ethiopia’s foundational ID project.

The agreement, announced last week, follows an agreement made between NIDP and TECH5 to use TECH5’s ABIS license for the use-case pilot operations.

NDIP, which aims to provide a robust and reliable digital identification for all Ethiopians, has completed its use-case pilot to register 100,000 citizens.

Now in the pre-launch phase, the program aims to scale its operations to over 10 million registrations in the 2022–23 fiscal year. A nationwide rollout is planned for 2025.

To reach the current year’s goal of over 10 million digital IDs, various upgrades in both hardware infrastructure and software licenses are required.

Based on the pilot’s experience, deduplication, the elimination of redundant information, is done using fingerprints and iris. In contrast, facial data is only used for authentication and KYC purposes.

“Because of satisfying results from the pilot as well as the immediate need to scale for the current fiscal year,” reads a press release shared by NIDP.

During the ongoing pre-launch phase of the program, digital IDs will be issued in selected programs from various sectors, including, but not limited to, education sector projects such as Student ID and National Exams, social programs such as Productive Safety Net Program, and financial sector applications in fintechs, credit systems, banking, loans, and insurance, for up to 1,000,000 registrants in the coming months.

The program has also onboarded the international firm EY as a procurement consultant to help with rollout strategies and benchmark international practices on digital ID procurements for the country-level rollout. 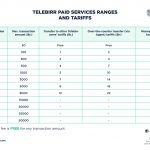